This post is quite overdue but I'm happy to report that I finally did something to change my situation - I've moved to Hong Kong. I've taken up teaching English here in Hong Kong, temporarily at least to get myself over here, and may well turn into a new career on its own..who knows.

Just to give a quick update of the events: I sold a few things and gave away almost everything else I owned to family, friends, and even strangers. After getting rid of basically all of my material possessions in less than two weeks I got on the plane to HK at the end of July.
(I actually took a two week long vacation here to Europe before I came back to HK for a second time.)

In August I dealt with the usual paperwork resulting from a move: activating my visa, opening a bank account, getting a new phone number, and applying for my HKID, among other things. On September 1st I started work in Hong Kong for the first time and only now do I have time to write this quick update. I'd like to say it's been great so far, but life is never so easy. I've been quite stressed with the new position as I try to settle in to a new workplace and routine. It's been a struggle to say the least.


So to get to the numbers, I spent a sizable sum of money in August, first on a vacation, and then as I settled here in Hong Kong without an income stream to support me. My new position only pays once a month and so I will not receive my first paycheque until early in October. It has been difficult as I use up my available cash, but I am confident I will be able to survive and not have to draw down my investments.

So here are my mid-month numbers as of Sep 21, 2016. I will try to get back to proper updates on the first of the month starting in October, but I've been so busy that I can't guarantee anything.

Considering how much I spent in August I am not too unhappy with the numbers - still within reach of the $50k mark and should begin climbing in the coming months as I settle in. 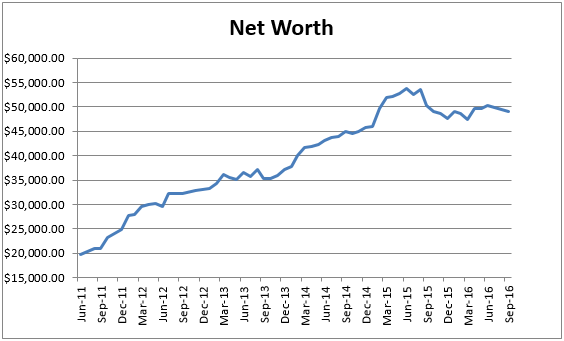