It has been a few months now since my last update but I have still been recording my monthly totals (I feel I will be doing them now until the day I die). My numbers and financial resources were greatly strained during the summer months when I was off from work and also because I took a trip back home after being away for a year. It is only after two months of work that I am beginning to inch back to growth and can finally start accumulating savings again.

The truth about living in Hong Kong is that while certain things are incredibly expensive, it is still possible to maintain a comfortable lifestyle while saving money - that is, if you earn at least a modest income and are okay living in tiny accommodations. Taxation is low in Hong Kong and it is also not taken off at the source so you have that money to use however you would like throughout the year. I know for some that this would be an issue later when a large tax bill comes all at once but for myself I enjoy the extra freedom to use the money until then.

If I do not take any trips during a given month I can expect to realistically save around half of my salary or $10,000 HKD($1,629 CAD at today's rate). Not a huge amount on a yearly basis but then again on my modest income I don't think I can complain.

For the sake of actually getting this post up and out there I've condensed all my numbers down to just the totals for this month. Truthfully the most interesting part is looking at the chart anyways. 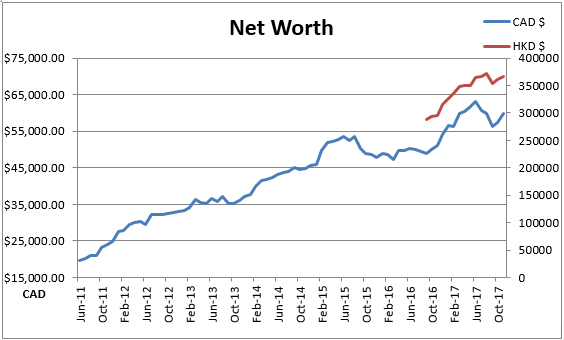